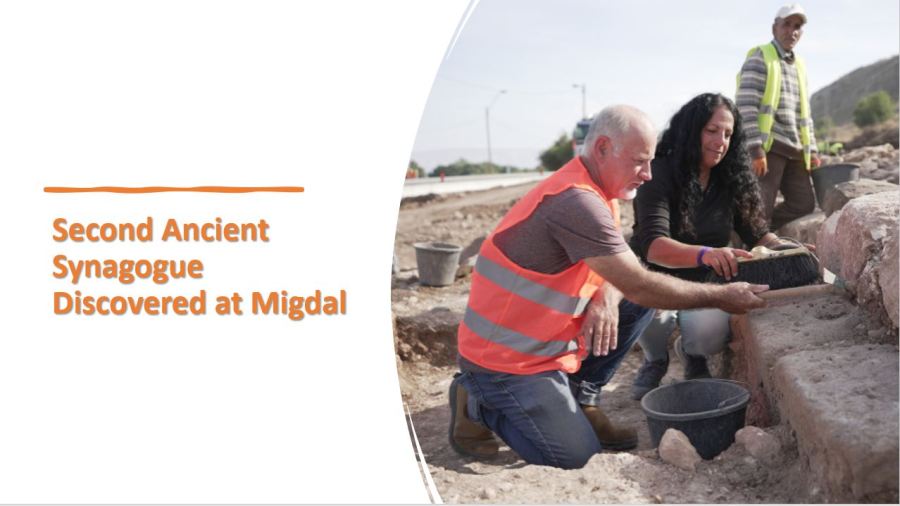 One of my favorite stops on Israel tours is Migdal (also known as Magdala), the home of Mary Magdalene. The ancient city was discovered in the early-2000’s when a conference center was being planned. Prior to development in Israel, archaeologists are called in to examine the area for possible ancient historic artifacts before heavy equipment is brought in to begin excavation. When a synagogue from the time of Jesus was uncovered in 2009, plans for the conference center were adjusted to accommodate further excavation of ritual baths and the synagogue. Ultimately, the Magdala Stone, emboldened with an etched menorah and designed to hold ancient scrolls, was found.

Now, a second synagogue from the same time period has been discovered at Migdal! This speaks of the desire for Torah reading, study and social life in the area. Mary Magdalene and her family were prominent, and would have participated in synagogue activity.

The site is of special interest to Christians. Magdala is in the area of the Galilee where the vast majority of Jesus’ ministry took place (Matthew 15:39). In addition, Mary Magdalene was one of the women who traveled with Jesus and witnessed his crucifixion and resurrection, and according to ancient Jewish historians such as Josephus, Jesus spent time in Magdala, and taught in the synagogues.

Time after time, archaeological discoveries confirm God’s Word! We can trust every chapter and verse of it!