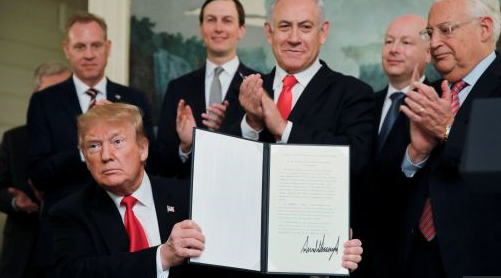 (Washington, D.C.) — President Trump made history this week by signing an official proclamation declaring that the United States now recognizes Israeli sovereignty over the Golan Heights. He did so during a Monday ceremony in the Oval Office with Israeli Prime Minister Benjamin Netanyahu. [Read the leaders’ remarks here.]

I commend President Trump and Vice President Pence for making this morally correct, strategically wise, and long-overdue decision. And I pray the U.S. and Israel will continue to work ever-more-closely together to prevent Russia, Iran and Turkey from taking over Syria and making it a forward operating base from which to attack the Jewish State.