The trip was so fast-paced that I didn’t have time and opportunity to share about every single place.  Mt Carmel and Tel Megiddo are two of those places, so we’ll go there today! Perhaps this map helps provide a visual of where these sites are located:

Mt Carmel is just south of Haifa, on the Mediterranean coast, and is actually a range of mountains, rather than a single peak.  1 Kings 18 recounts Elijah’s battle with the worshipers of Baal.  Read the entire account, but keep in mind that the the battle was over whose god was really god, and though Elijah drenched the altar in water, fire reigned down from heaven, proving the reality that God is God!

Today, a statue of Elijah stands on Mt Carmel. 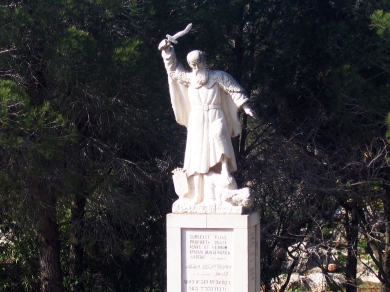 That confrontation could have taken place in an area like this: 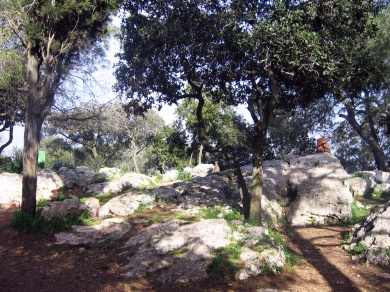 Megiddo is a tel (a stack of civiliations), not too far east of Mt Carmel.  Megiddo is located at the crossroads of the north-south and east-west trade routes, so was a very popular place for civilizations to arise over the many years.  In addition, pagan worship often took place there.  Here is a re-constructed sacrificial mound at Megiddo.

Another reason cities continued to be built upon one another over time here is because there was a water source.  An underground spring supplied water to the city and the water tunnel remains.  (This picture is actually from a previous trip, as we did not have time to see the water tunnel on this trip!)  BTW, women were responsible to fetch water each day.  Can you imagine descending into this tunnel and hauling up buckets or jars of water every day?  What a job!

Finally, the Hebrew word for “mountain” is “har,” and this site is also called “Har Megiddo.”  Does that sound familiar?  The Bible describes an end time event which we call Armageddon in English!  Yes, the Battle of Armageddon will take place in the valley seen clearly from both Mt Carmel and Megiddo.  In fact, there is an Israeli air force base (Ramat David), whose runways are clearly seen in the photo below.  However, the base itself is underground, and all planes are safely bunkered!

The Jezreel Valley is absolutely beautiful.  Hard to believe that one day armies will gather there to prepare for battle!

Hopefully these pictures will help the Bible come alive as you read of the people and events in this area.