We started the day at one of the most important holy sites in all of Jerusalem…the southern steps to Temple Mount. The Temple was destroyed in 70 AD, but the platform, known as Temple Mount remains. We know for certain that Jesus would have entered the Temple from the southern steps, where all commoners entered.

Jesus, as well as the Jewish rabbis, would have sat on these steps to teach, so we followed His lead! Here we are, gathering to hear Pastor Mark.

We know that the Temple was totally destroyed by the Romans in 70 AD, and that not one stone of the Temple was left on another. Today, we see evidence of that in this large pile of stones. 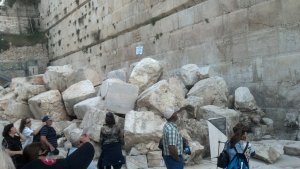 These are stones from the Temple that were pushed off of Temple Mount after the Roman conquest. We also know that the pavement we walked on in this spot was pavement on which Jesus would have walked.

After the Romans destroyed the Temple and the city, Jews scattered all over the world. Amazingly, they never lost their identity as Jews. But, they did integrate into many other cultures in the world. (Russian Jews, German Jews, American Jews, etc), and the Hebrew language died out.

We saw evidence of another prophecy fulfillment with our own eyes today. Keep in mind that Jerusalem was utterly destroyed, and the Jews were totally dispersed after 70 AD. However, Zechariah 8 speaks of the Lord’s promise to bless Jerusalem. Zechariah wrote during exile of the Jews to Babylon centuries before Christ. Read the full chapter, but focus on verse 5 promising that children will again play in the streets of Jerusalem. We spent a great deal of time in the Jewish quarter of the Old City today, and here is what we saw all around the area…

Indeed, Jewish children play all over the city!

Finally, evidence of conflict is everywhere. The picture below is unclear, but hopefully you can make out the gray fence snaking through the distant background. That fence is within Israel and separates the West Bank (Palestinians) from Israel proper.

Psalm 122 urges us to pray for the peace of Jerusalem. Please do so!