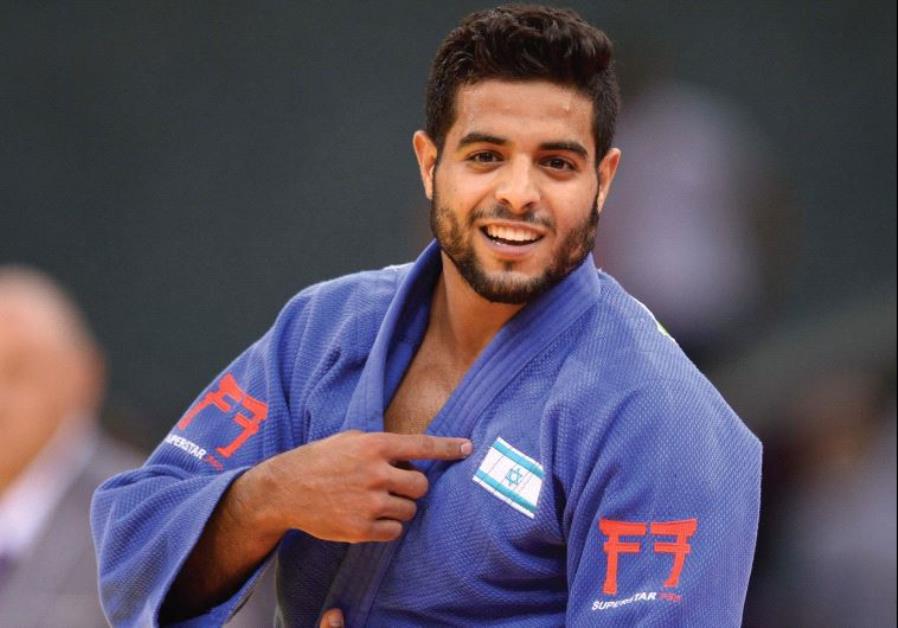 Earlier today, Israeli judo champion, Sagi Muki won a gold medal at a major international event in Abu Dhabi UAE.  This is not the first gold medal win for Muki or the Israeli team, so what is so special about today’s win at the Abu Dhabi Grand Slam?

History was made as “Hatikva” (the Israeli national anthem) was played and the Israeli flag raised for the first time in a sporting event hosted by an Arab country.  It has only been in recent years that athletes from Israel were allowed to compete in international sporting events in Arab countries.  Initially, not competitive enough to vie for podium positions, it was a non-issue.  However, as Israeli athletes improved and took well-earned positions on the medal stand, they were forced to do so without their flag being raised or their anthem played.  As recently as the same event last year, Israeli gold medal winners were deprived of the same recognition as other gold medalists.

That all changed today when Muki’s victory was celebrated in full, including flag and anthem!  In attendance at the event was Israel’s Culture and Sports Minister Miri Regev, who presented the medals and showed visible emotion as she proudly mouthed the words of “Hatikva” as it played.

Amidst chaos and evil hogging headlines these days, we are wise to recognize how the Lord continues moving pieces into place to fulfill Bible prophecy.  Not only is there rising cooperation between Israel and Saudi Arabia, but even Arab media is reporting that officials in Oman are recognizing Israel as a nation state.

“Israel is a state present in the region, and we all understand this. The world is also aware of this fact. Maybe it is time for Israel to be treated the same [as other states] and also bare the same obligations.”
~Omani official Yusuf bin Alawi bin Abdullah, Aljazeera, 10/27/2018

Just as God spoke through the prophets of old, we are seeing moderate Arab nations separate themselves from other more radical Muslim countries and forging relationships with the Jewish state.  In the end, Egypt and Assyria, along with Israel, will reap blessings from the Lord.  (Isaiah 19:24-25)  Likewise, the Arabian peninsula (including Saudi Arabia, Oman and the UAE), known as Sheba and Dedan in Ezekiel 38:13, are among Muslim nations who will not join other Muslim nations (and Russia) in attacking Israel.

So, is a gold medal ceremony following a sporting event really that big a deal?  It is when it reveals another small piece of fulfilled prophecy!

For more information on the gold medal win and its impact on the Israeli delegation, click here.